I’ve had a succession of Garmin watches, starting with the Forerunner 201 many years ago. Now I have the Garmin910XT, and I thought that it did pretty much all I need; it has a pretty good battery life, but I’m not a fan of the barometric altimeter, and I probably only use about 10% of its functions. I like to download data from my long runs to see the overlay on the terrain map…but I usually don’t wear it for shorter regular runs because I’m too lazy to wait for satellites, or synch it with my computer.

Then along came the Bia-sport GPS watch.

My friend Sue was involved early in the Kickstarter campaign that got the Bia-sport company off the ground.

The company is headed up by two women who wanted to make a GPS watch for women with a completely new approach, instead of “pink it, and shrink it”.

In 2012, after unsuccessful attempts to raise funds from venture capital firms, who responded with “women don’t wear GPS watches”, they went on to have one of the most successful Kickstarter campaigns…and now the watch is a reality.

For those of you not into long rambling reviews…I’ll cut to the chase…I started using the watch, and I am loving it more and more. It just enjoyed all three days of the Western States training camp. These are the features that really stand out to me that set it apart from my Garmin.

There are two parts; the GoStick and the wristwatch. 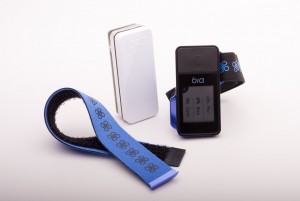 The GoStick is the meat and potatoes that contains the GPS tracking your workout, ANT+, a rechargeable battery, an accelerometer, and a GSM cellular modem. The battery life is 17 hours…good for at least a 100K!…and it recharges quickly using the USB cable.

The GoStick weighs a little over and ounce and a half (44g) and it can either clip onto a waistband, or be carried in a pack. With a quick shake, the unit wakes up…connects with the wristwatch…and you’re ready to go. Here it is next to a packet of GU (32g) for the ultimate ultrarunner point of reference.

The wristwatch has a separate battery that lasts 18-24 months, so even if your GoStick battery has died, you still know what time it is…another feature I really like. The wristwatch sits slanted on your wrist…completely missing that sticky-out wristbone…no more swelling and bruising. The back of the watch is curved to provide a comfortable fit, and is so light, you hardly notice it’s there. It fits really nicely…my wrists are fairly small and when I had previously tried on the Suunto Ambit, it was like strapping a dinner plate to my arm! The strap is velcro, so occasionally it’ll catch on clothing, but it feels comfortable, and it can be changed out easily for a different color.

By itself, the watch can also be used as a timer and stopwatch, and heartrate monitor if paired with an ANT+ strap. The watch weighs a little over an ounce (30g, or about a GU packet). When the watch is not in use, the time shows on the screen. It has one big button to the left of the screen, and other features are selected using the touchscreen.

Both pieces are robust…apparently you can put the GoStick through the laundry, although I took their word for it on that one.

You can select run, bike, swim or multisport options…you can also hook it up to an ANT+ heart rate monitor strap. For running, there’s an indoor option, laps, and run/walk. When you hit the start button, the screen displays elapsed time, pace and distance…with the time of day in the bottom corner of the screen. They are still developing some of the multisport, lap and swim features…but whenever they have an upgrade, the GoStick receives it automatically when you’re charging it. 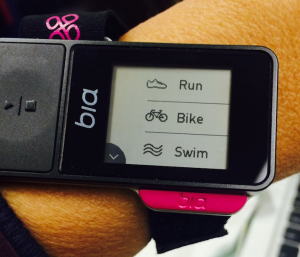 If you’re not a fan of Strava…then become one!  You can set up the watch to sync directly with Strava so your workouts upload without needing a computer. I love that part, and find myself using Strava a lot more than I used to. The watch will sync directly with Map My Run too. The company is working on similar connections with other training websites such as garmin connect, but data can be exported as TCX/GPS files. The data is also available on mybia-sport looking like this: 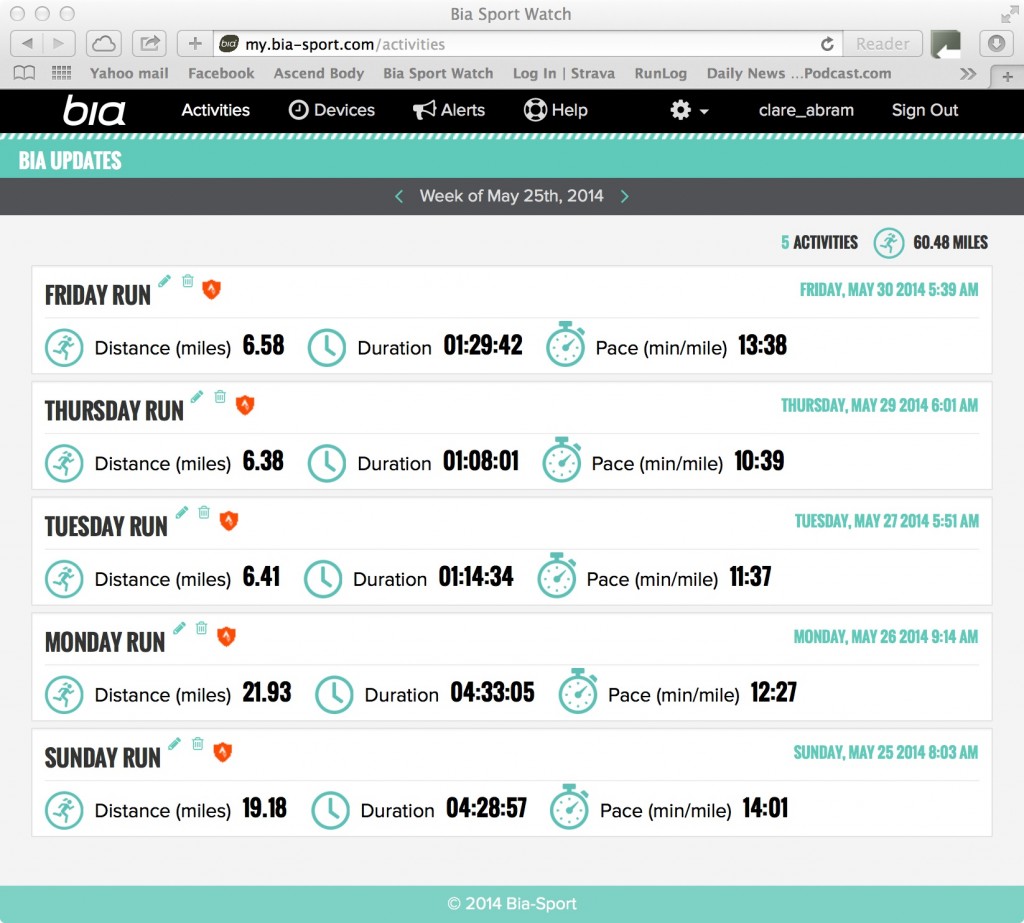 …with map data too: 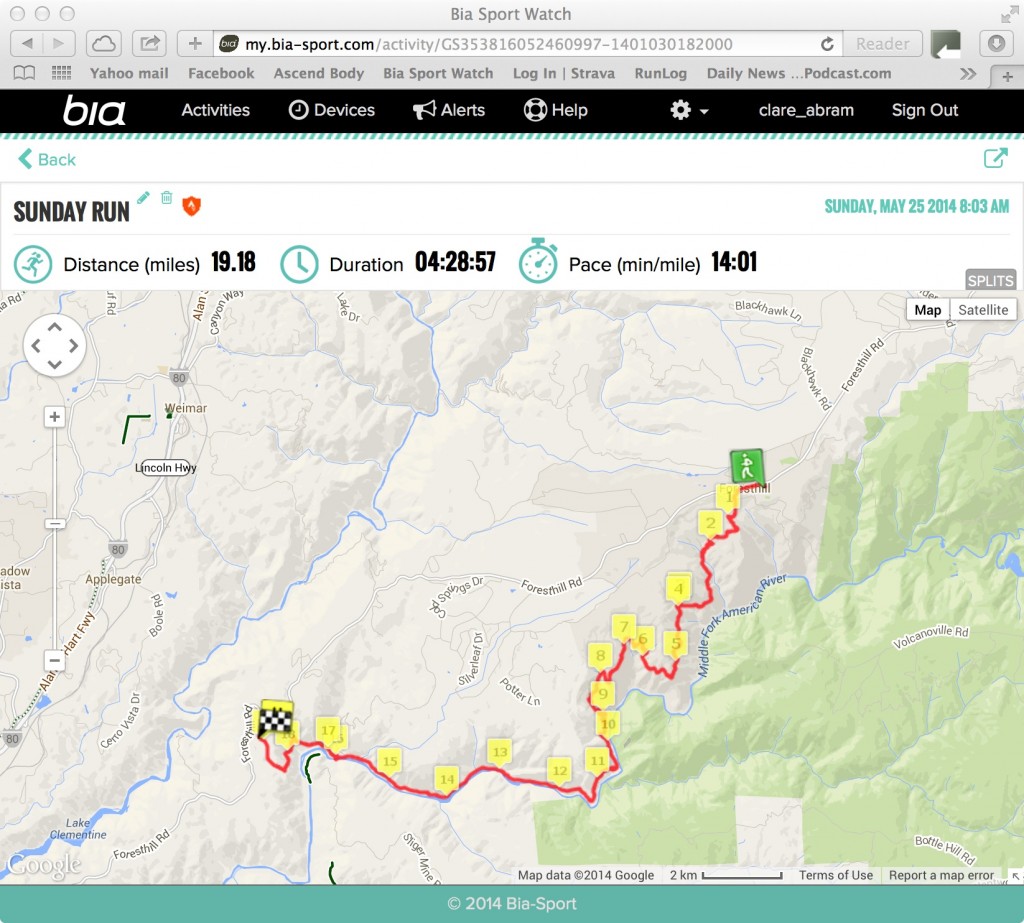 Real time tracking is available too, with a subscription, which could make Ultras even more exciting to watch.

It does not have a light-up screen unfortunately…it sounds like the company made a difficult decision to drop that feature from the design, but they would like to work it into a future model if possible. But, if I’m running in the dark…I’ll have a headlamp I suppose. And if you’re used to your Garmin beeping at you and buzzing your arm…the Bia doesn’t do that, although it gives a summary screen for a few seconds after each mile.

During a workout, if the GoStick gets too far away from the watch…say for example I put my pack down by the river on Day 2 of the Western States training camp, and go for a swim…the watch will tell you it has lost the connection with the GoStick, and you just have to press the button for it to reconnect. The GoStick continues to track your workout so no data is lost. My watch has an occasional glitch when it would lose real time in this situation…but I emailed the company, and they were super helpful and responsive. It’s an issue they are working on and were keen to get feedback.

Finish your workout, and the watch gives you a motivational phrase! Apparently someone reported getting “Badassery” after a particularly tough workout. My watch thought the Western States canyons were “Epic”, and I got “Fierce” this morning. It always makes me smile! 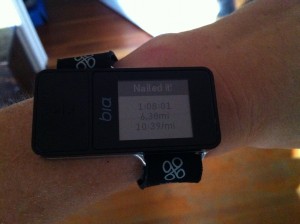 The watch sells for $279 plus $10 for shipping…choose your color:

and it comes in a fancy box, with a fancy bag… 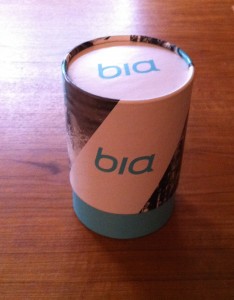 And all this talk about a GPS watch for women…they’ve “big-ed it and blacked it” to create a man version too!

This review by DC RainMaker has lots more detail and pictures if you’re interested, and here you can compare the Bia to practically every single other GPS watch out there.

If you’re a female looking for a new GPS with some neat features, definitely check this out.

[This review was provided by URP friend Clare Abram. Clare runs all distances on the trails, up to and including hundred milers, and is preparing for Western States later this month.  She was given the watch as a gift from the aforementioned friend Sue.  She has No Financial Interest in the company.  All words are her own.]